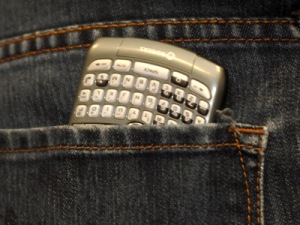 Last week, Reuters carried this story with the headlines: ‘Butt-dial’ call foils suspected Arkansas murder plot. The more discreet of us would call it “pocket-dialed.” Anyway, a would-be Arkansas murder plot came undone when one of the suspected co-conspirators sat on his phone and “pocket-dialed” the targeted victim, who heard details of the planned hit and alerted police. James Macom, 33, last week overheard his former employer Larry Barnett, 68, telling a suspected hit man to “make the killing look like an accident.” The potential victim contacted police and filed a report at the station and returned with police to his home, where an intruder had apparently broken in and started a gas leak. Barnett apparently “was looking up Macom’s contact information on his phone to give to the hit man and accidentally dialed the number from his pocket” [so it was pocket-dialed], police said. Barnett was arrested last week for conspiracy to commit murder. Jonesboro, where the incident occurred, is 120 miles northeast of Little Rock.

I have been preparing to preach a sermon this Sunday on Tamar and Judah from Genesis 38. This account is a part of the larger story of God’s providential care for Israel (through Joseph and his famine-relief plan) and ultimately for the world through the Messiah, whose lineage is traced back to this unlikely couple, Judah and Tamar. Divine providence is the means by and through which God governs all things in the universe. The doctrine of divine providence asserts that God is in complete control of all things. This includes the universe as a whole (Psalm 103:19)), the physical world (Matthew 5:45), the affairs of nations (Psalm 66:7), human birth and destiny (Galatians 1:15), human successes and failures (Luke 1:52), and the protection of his people (Psalm 4:8). Islam also has a very interesting belief in the decrees of Allah (Qadr), but that will be for another time.

Some folks would argue that this concept of God destroys any possibility of free will. If God is in complete control, how can we freely make our decisions? In response, I would ask a few questions of my own. Is it really true that in order for our will to be free, there must be some things which are outside of God’s sovereign control? What if that were true? Would it not possible for us to somehow slip through the cracks? Paul says in Philippians 1:6 that “He who began a good work in you will bring it to completion at the day of Christ Jesus.” If God is not in control of all things, then how can we believe that he can make good on his promise?

In addition, if God is not sovereign, then he is not All-Powerful because there would exist contingencies outside of God’s control—namely, our “free will” which can trump providence. In my recent blog on this subject, I mentioned that the solution is not found in pitting human freedom against divine sovereignty or creating a hybrid of the two (as in Islam). Rather, we should keep the tension by holding them in “antinomy”; the apparent incompatibility between two seemingly irreconcilable truths which are both held as undeniably true. Thus divine providence does not destroy our freedom, but mysteriously works together with it and through it to accomplish God’s justice and righteous purposes in this world.

Dave, are you trying to say that this butt- (I mean pocket) dialing incident is part of God’s providential care for his universe? Yes. Are all pocket-dialing incidences providential? Probably not, but then again we don’t know what they eventuate in, do we? We do know that not every evil situation is prevented from happening by God’s providence, however, a biblical worldview would suggest that there may be more than we will ever know.

3 thoughts on ““Butt-dialing” and the Providence of God”