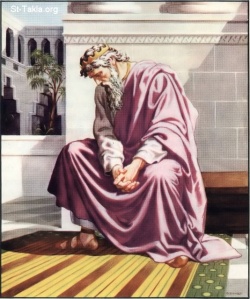 One of the most tragic portions of the Old Testament is found in 2 Samuel 18:33, “And the king (David) was deeply moved (upon hearing his son Absalom had been killed) and went up to the chamber above the gate and wept. And as he went, he said, ‘O my son Absalom, my son, my son Absalom! Would I had died instead of you, O Absalom, my son, my son!’” Last week I asked you to think about what the key issue was that if properly addressed might have prevented this tragic family situation? Many of you responded very perceptively and I think that most of you noted it was because David did not deal properly with the rape of Tamar—in fact, he did not deal with it at all. He was not only the King but also the Judge of Israel and yet, he did not do justly. Amnon was not confronted, nor was he made to take responsibility for his deed.

Absalom was not only angry at his half-brother Amnon for the rape of his sister, but also angry at David for his lack of justice. While Absalom’s murder of Amnon two years later cannot be justified, it can be understood. Once again King David made a terrible mistake and allowed a crime to go unpunished, because it was committed by a member of his own family. David did not carry out God’s justice for disobedience to his laws and commandments and allowed his ambivalent family relations to get in the way of conducting righteous leadership.

Absalom returned to Jerusalem and two years later demanded to see his father David. “Now then, I want to see the king’s face, and if I am guilty of anything, let him put me to death.” Absalom essentially sought a full pardon, but showed no sign of repentance. He believed his father would not put him to death. When he went in to see the king “he bowed down with his face to the ground. And the king kissed Absalom” (2 Sam 14:32). King David indulgently forgave his son and gave him a semblance of reconciliation with the royal family, but totally ignored the need for repentance and justice. David was not authorized to pardon his son because of his conflict of interest. A court of impartial judges should have dealt with the matter.

These mistakes in godly leadership eventually led to the fulfillment of the curse Nathan pronounced on David years earlier for his sin with Bathsheba. 2 Sam. 12:10-12, “This is what the Lord says: ‘Out of your own household I am going to bring calamity upon you.’” Does this mean that all of this tragedy was inevitable as a punishment, or did it mean that God knew David’s heart (just like he knew Pharaoh’s) and he knew the outcome? I think the latter. If David was half as concerned with his family, and sought God’s wisdom for it as much as he was about beating up on the Philistines, he could have prevented this tragedy. It could be argued that Absalom might have rebelled anyway, but it wouldn’t have been justified (in his mind, at least) by his father’s indulgent passivity.

A general application of all this is certainly the importance of dealing with issues as they arise. Don’t let them fester or else they might create complexities that seem overwhelming and impossible with which to deal. The other take away is meant particularly for fathers. If you were as passive and detached in your job or ministries as you are in your family, where would you be right now in your employment? Might I suggest you would be unemployed or without a ministry? Turn your heart and your attention towards home. May you weep for your children now, so you won’t need to weep for them later.