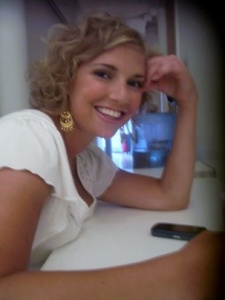 …that wasn’t her name but rather the name of her still active website http://www.annabanana.org. Anna O’Connor was my great niece and she succumbed to Stage IV Neuroblastoma cancer a year ago today (actually, it was February 29). Neuroblastoma is primarily a childhood cancer which originates in the sympathetic nervous system and then quickly spreads to various organs in the body. It is rare in older children and yet she was diagnosed with it when she was 17; the summer before her senior year in high school. She lived with it for nearly ten years, and she died after obtaining a Masters in Clinical Psychology from the Wheaton College grad school. She was 26.

Some would say she lost her battle with Neuroblastoma, but it would be more accurate to say she used the disease as a platform of influence and to bring comfort and hope to many children and families afflicted with the cancer. Through her foundation (Anna’s Hope), she raised thousands of dollars for research as well as public awareness of this virulent and relatively unknown form of cancer. She also “outlived” everyone’s expectations so that every breath she took and every experimental drug or treatment she participated in helped others with the disease, and may lead to an eventual cure. Her faith in Jesus and the hope of the life to come not only sustained her (and continues to sustain her family), but made her an “overcomer” if not a survivor. Like the rest of us, she wasn’t a saint, but she was an incredible steward of something that no one ever wants and turned it into a life that no one can ever forget. I had the privilege of speaking at her memorial service at Wheaton College last March which was attended by 1500 people.

I am actually writing this blog on a flight home from New England where I just spoke at another funeral for a very gifted young man from a beautiful family. He worked with memory-impaired people and his life was cut short at 29. Ironically, the very funeral home in which I did the service held the remains of yet another gentle young man whom I knew; age 22. Also, in attendance at the service was a wonderful family whose delightful mid-30’s daughter is in a semi-conscious state at a rehab hospital in Boston; the result of Meningitis. These are all young folks who grew up in my church and whom I either dedicated, baptized, or taught, as well as loved. No longer can I think that death is the unique possession of the old.

What is there to prevent this plane from going down or what is keeping me from contracting a mysterious virus from the guy sitting next to me? Oh no, he just sneezed! What assurance do I have that I will not slip into a deep depression and try to take my own life? I know that what I am saying is deeply disturbing to many of you who have had these thoughts or who feel vulnerable to all the dangers that lurk around us.

Anna’s favorite passage of Scripture was Psalm 62. She found great comfort and hope there. “My soul finds its rest in God alone; my salvation comes from him. He alone is my rock and my fortress, I will never be shaken.” The Psalmist admits that in himself he is just a leaning fence and a tottering wall. However, when he puts his trust and hope in God alone, he cannot be shaken. This sounds like Paul in Romans 8, who confesses that every day he faces death and feels like he is a sheep about to be slaughtered. Yet, because he believes that God is for us and nothing will ever separate us from the love of God in Christ Jesus, he is able to say “in all these things we are more than conquerors through him who loved us.”

Anna learned what many of us have not yet grasped. Though we live in a dangerous world that groans beneath the weight of suffering, there is a refuge and fortress for our souls in the Lord Jesus Christ. He is the Rock that enables us to steward whatever we face and reinterpret it for the glory of God. Luther wrote of this in his A Mighty Fortress is our God: “And tho’ this world with devils filled should threaten to undo us; we will not fear for God hath willed his truth to triumph through us.” God’s truth will triumph through our Neuroblastoma, through our Meningitis, through our persecution and suffering, and even through death itself. “Trust him at all times, O people; pour out your hearts to him, for God is our refuge” (Psalm 62:8).

3 thoughts on “In Honor of Anna Banana…”