What if there was a man who woke up in the middle of the night only to find that his house was on fire. Can you imagine the horror of that? Let’s say that he got out of bed, sat down, and proceeded to write an essay on The Origins of Fire in Private Homes. [I am indebted to William Barclay for this title.] What would you say to him? “What a thoughtful and deep thinker you are, sir.” I think not. Instead you would say, “Hey, call the fire department! Wake up the kids! Get the heck out of the house!” In other words, now is not the time for philosophical thinking. There are things to be done. Deal with it! Why is it that in crisis most of us wax philosophical and ask the “why” questions? (I guess I just asked one.) Do those questions yield answers that really satisfy us? Would it have helped the man at END_OF_DOCUMENT_TOKEN_TO_BE_REPLACED

This week in history…  April 17, 326 AD was the recorded death date of Alexander of Alexandria; a priest and patriarch of the Church who survived the persecutions under Emperor’s Galerius and Maximinus, and who first opposed the heretical teachings of Arius. April 18, 1521 was the date of Martin Luther’s trial at the Diet of Worms where he spoke the most famous words of the Reformation “My conscience is captive to the Word of God. I cannot and will not recant, for to go against my conscience is neither right nor safe. Here I stand, I cannot do otherwise, God help me. Amen.”  Also, on April 18, 1985 our family was blessed with the birth of my great-niece, Anna Elizabeth O’Connor. She is now with Jesus, but her brief life was incredibly influential.  April 20, 1999 was the date for the Columbine killings; what a tragedy that was.  Do you remember where you were when you heard the news? On April 20, 1889 Adolf Hitler was born. What a horrible day for this world; may God severely judge his soul! These are only a few events that have made this week in history a week mixed with blessing and horror. However, there is one more date to consider: April 15, 1912. It is the infamous date when the Titanic sank and 1522 people aboard perished. (I don’t think you remember where you were on this one.) Christian History magazine tells the story of one of the passengers by the name of John Harper. He was an evangelist from England invited to preach a series of messages at Moody Church in Chicago. When the ship hit the iceberg and began to sink, he put his six-year old daughter (he was a 39-year-old widower) into a life boat, gave his life jacket away, “and then ran through the ship warning others of the danger and talking to them about the eternal destiny of their souls. When he was finally forced to jump into the icy water, he clung to a piece of wreckage…” The October 1928 issue of The Latter Rain Evangel (published by The Stone Church, a historic Assemblies of God congregation in Chicago), recounted the following story of John Harper’s last convert. Three or four years after the Titanic foundered (1912), a young Scotsman rose in a meeting in Hamilton, Canada, and said: “I was on the Titanic when she sank. Drifting along on a spar in the icy water on that awful night, a wave brought John Harper of Glasgow near to me. He, too, was holding on to a piece of the wreck. ‘Man, are you saved?’ he shouted. ‘No, I am not!’ was the reply. He answered, ‘Believe on the Lord Jesus and thou shalt be saved.’ The waves bore him away; but strange to say, a little later he was washed back alongside of me. ‘Are you saved now?’ ‘No!’ I replied, ‘I cannot honestly say that I am.’ Once more he repeated the verse, ‘Believe on the Lord Jesus Christ and thou shalt be saved.’ Then losing his hold he sank. And there, alone in the night, and with two miles of water underneath me, I believed. I am John Harper’s last convert.” [For a very powerful video presentation of this see Justin Taylor’s blog at http://thegospelcoalition.org/blogs/justintaylor/2012/04/15/john-harpers-last-convert/] The history of the world rolls on and rolls out tragedy, heartache, and horror. Yet, in the midst of this darkness our Sovereign God does His greatest work. Perhaps our birth or death will not be remembered in the history books, but let us never discount the influence of our little lives. Though we may feel like we are just hanging on, we can speak a word that can affect the destiny of someone forever.

I love to read the Old Testament. I have been in Ezekiel for awhile and have noticed a phrase that is repeated many times over, “then shall they know that I am THE LORD.” It is used 46 times in the first 30 chapters. God said through the prophet that all the judgment He was bringing upon his people was to show the world that He was not some tribal deity, but THE LORD! Israel had forgotten their very calling as God’s people to declare His glory. They went after other gods just like the nations around them and so God brought judgment upon His own people. He did this not just to punish them and send them into captivity, for if He had stopped there the nations would have concluded that He was just a tribal god who had been defeated by their stronger gods. No, God said that He would also rescue His people and restore them to their land. Ezekiel 36:22-24 is the key in understanding this restoration; it was not going to occur just to benefit Israel and to end their suffering, but “for my holy name’s sake.” God’s restoration of Israel after the Babylonian Captivity was so that the nations would know that He was THE LORD! But there is more to Ezekiel’s prophecy – God would not only bring Israel back from captivity but would also transform the very heart of His people to live in such a way so that “I am hallowed in you.” God looked beyond the restoration of Israel to the New Testament age of the Church. At that time redemption through the shed blood of the Messiah and the gift of Holy Spirit would come and change the hearts of the people of God from the inside out (sprinkled clean from impurities, replace the heart of stone with a responsive heart), so that through them the nations would see His Glory. That was Israel’s mission and now it is ours as the Church- to declare his Glory, through our humble lives. So how are you doing with that? Could anyone possibly discern through the way you live— and even through the difficulties you experience, that God is not just relevant for you (your own tribal deity), but is THE LORD of the nations? Is He glorified even in your suffering? 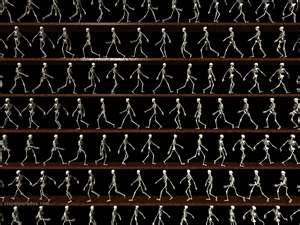 I once sat through a Maundy Thursday Communion service in rapt attention with the increasing darkness of the room, listening to the readings from the Gospel of Matthew. I heard and felt the thunder and earthquake at Christ’s death and heard about the temple curtain being torn asunder, the rocky tombs around Jerusalem being split in two, and some “holy people” being raised from the dead. My first reaction was one of complete awe. My second reaction was, “I hope nobody asks me to explain that passage.” Well, wouldn’t you know it, the next morning at our Good Friday service someone did ask. I blabbered out some explanation, but it was rather obvious I didn’t know what I was talking about. So I went back over the section (Matt. 27:51-53) and made the following observations: 1) The material in this section is unique to Matthew and fits with what he wanted to communicate to his Jewish readers about Jesus. (2) The temple curtain that separated the Holy of Holies (the very Presence of God) from the rest of Israel was torn asunder from top to bottom (a God-thing, not a human action) and it happened before the earthquake. The death of Christ opened up access to God to anyone who comes to Him through Christ, our Great High Priest (Heb. 10:19-22). 3) The earthquake split open some tombs around the city which were often built into natural rock caves. Could it be that the rocks were crying out because no one was praising the Savior?  4) In older Greek manuscripts the numbered verses 51-53 composed just one sentence, so all the events were reported to have happened- not just the believable ones. 5) At Jesus’ resurrection there were some of the believing remnant of Old Israel (who longed for Messiah’s Coming) that were also raised from the dead, thus being united with believers in the New Israel of God. They came out of their tombs and were seen by many in Jerusalem; this seems to have happened after Jesus was raised because he was the “first- fruits of those fallen asleep” (1 Cor. 15:20). 6) Why do I find this resurrection so hard to accept when I do not stumble over the even more miraculous resurrection of Jesus? 7) What happened to these resurrected saints? Did they go to heaven in transformed bodies, or did they re-die like Lazarus? 8) I am left back where I started; not being able to figure it all out, but in complete awe of what I do understand— that the power of Christ’s death and resurrection opened up for me (a Gentile) a way of relationship with God that never would have been mine apart from Christ. Wow, that is just an incredible thought!