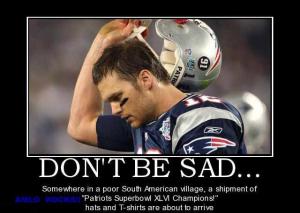 Many people in our church have been so kind and sympathetic (like the person who sent me the picture to the left) because of the New England Patriots loss to the Giants in the Super Bowl (again) this past Sunday. A few of these folks have actually been sincere. Alas, we Pats fans blame it on so many things: from Madonna to M.I.A.’s gesture; to fact that the refs did not restore 8 seconds on the clock after the Giants “flagrant” 12-men on the field penalty. There was a very interesting article in the Wall Street Journal this past Tuesday that one of my “sincere” parishioners gave me. It analyzed the last bizarre minute of the most watched sporting event in television and internet history. It calculated the chances of the Patriots winning if certain things had or had not happened. Stay with me: if the Patriots had let Ahmad Bradshaw of the Giants score on the first down instead of the second down, their (Pats) chances of winning would have been 10.3%; if Bradshaw had taken a knee on the second down instead butt-flopping into the end zone, the Pats chances would have declined to 1.9%. Then with 17 seconds left and the ball on the 44 yard line, the most potent offensive force in human history besides the US army, had plenty of time to score at least 3 or 4 touchdowns (the article didn’t mention this, if you can believe it). The Giants were called for having 12 men on the field. It moved the ball to the 49 and gave the Pats a 12.2% chance of winning. However, the play that incurred the penalty had burned 8 seconds off the clock- only 9 seconds were left. The NFL rules allow the refs to give expired time back if they determine that the penalty was a “palpably unfair act,” which obviously it was because the Giants had practiced that play at least ten thousand times in that week—or so my sources say. If they had been given back those 8 precious seconds (pay attention), the Pats chances of winning would have risen to 20.4% — almost a sure thing. So there it is, plain and simple; the reason why the New England Patriots lost Super Bowl XLVI was because of a lousy judgment call by the refs.  OK, by now you know I am just kidding about blaming the refs, but it does show you how easy and plausible it is to make excuses and blame others when things do not go our way. We are just like Adam who said, when confronted about his sin, “The woman you put here with me— she gave me some fruit from the tree, and I ate it” (Gen 3:12). Instead, we should own up to our failure and sin, come clean and repent before God and others, and move on to the next season of our lives more humble and more committed than ever. If we do not, then we just keep repeating the last minute over and over again- like Groundhog Day– stuck. So, good game Giants! (although, I do think if Wes Welker hadn’t dropped that pass…)